When does a bitch first come into heat?

Puberty, or sexual maturity in the bitch, usually occurs around six months of age although this varies. The smaller breeds tend to mature earlier and some bitches can have their first heat (oestrus) as early as four months. On the other hand large and giant breeds can be two years old before they come into heat for the first time.

How often is my bitch likely to come into heat?

On average this occurs about twice a year. However it is variable. After the first heat there is often a great deal of variation in frequency. Some bitches can take a year to eighteen months to settle down to a regular cycle. A normal interoestrus interval (the time between seasons) can range from 3.5months to 13months.

Despite claims to the contrary there is no evidence that irregular heats predispose to false pregnancies or pyometra (pus in the womb).

How long does heat last?

From beginning to end allow at least three weeks. Heat should be considered to begin with the first signs of discharge and with the bitch paying attention to her vulva. This on examination will appear swollen. It ends when all discharge ceases and the vulva has returned to its normal size.

What are the signs of heat?

The most notable sign is vaginal bleeding. Sometimes this does not become apparent until a few days after the bitch has actually come into heat in which case vulval swelling should be taken as the first sign, plus the bitch paying a lot of attention to her rear end.

From the beginning of the heat period she will be attractive to male dogs but does not usually allow mating until about 7-10 days later. Then the discharge will be less bloodstained.

In some bitches the discharge can be heavy and very bloodstained. If you are concerned please consult us.

You may also find the bitch is passing small quantities of urine more frequently. This is her way of advertising to any interested males that she soon be ready for mating.

How do I know when it is the best time to mate the bitch?

This can be difficult. Some bitches can ovulate either early or late during the heat period. However most bitches ovulate and are receptive from around the 11th day and be less bloody and the bitch will be actively looking for a mate.

"Some bitches can ovulate either early or late during the heat period. However most bitches ovulate and are receptive from around the 11th day and be less bloody and the bitch will be actively looking for a mate."

Are there any tests to determine when to mate my bitch?

Yes, there are simple tests available which we can arrange.

Are these blood tests?

Yes. There are tests available that measure the level of certain hormones in the blood which give a good indication of the best time to mate the bitch. They are usually undertaken about a week after the commencement of oestrus. Although not 100% accurate they are considerably more accurate than previous methods which depended on the examination of vaginal smears.  Often a combination of vaginal cytology and blood tests are used. 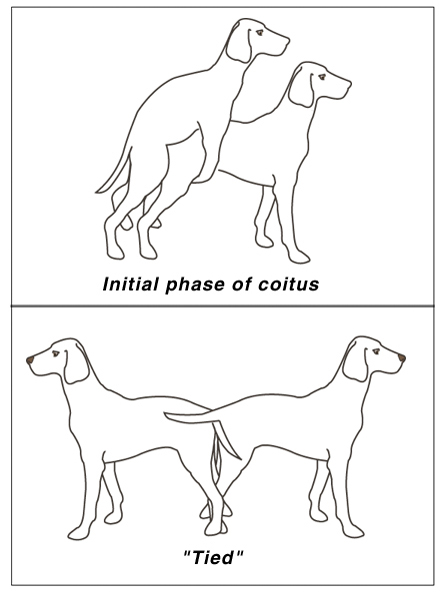 What can I do to ensure mating is accomplished satisfactorily?

Surprisingly male dogs appear to be more stress sensitive than bitches thus successful matings are more common when the dog is in its own environment. It is for this reason that bitches are usually taken to the stud dog.

The time of mating is extremely critical and it is for this reason that it is worthwhile having tests carried out at the practice.  For most bitches the most fertile time is between 10-14th day of oestrus. Some bitches ovulate as early as the third or fourth day or as late as the eighteenth day. Blood tests will give an indication regarding this.

It is also quite usual to arrange for two matings for your bitch, often 24 or 48 hours apart. Check these details with the owner of the stud when making initial enquiries. Also check the situation if your bitch does not become pregnant as a result of the service.  It is commonplace for owners of studs to offer a free service next time.

I was told that my bitch had tied well with the dog and that only one service was necessary. What does this mean?

The genital anatomy of the dog and bitch is such that during coitus part of the dog’s penis (the bulbis glandis) enlarges and is held firmly by the muscles of the vagina which contract, thus preventing the penis from being withdrawn. This is the tie that is considered a desirable feature for a successful mating although pregnancy can occur without a tie. Once tied the dog will often step over the bitch or be turned by handlers into a position so that the animals are back to back.

I found my dog tied to a bitch during a mismating. Was there anything I could do to separate them?

There is little point in trying to separate animals that are locked in this way. Buckets of cold water, water pistols, etc. do little to speed up the process of separation and merely upset the animals.

If a mismating has occurred, please contact us. Injections are available to prevent pregnancy.