Castration: Sterilisation or Neutering of the Male Dog 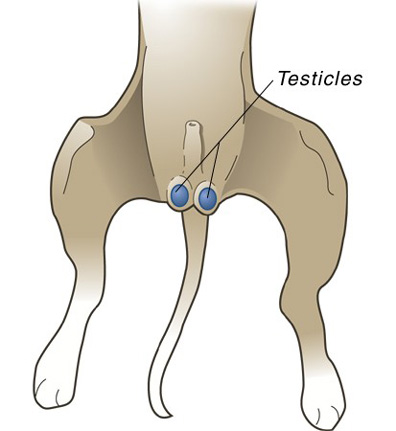 Why should I have my dog castrated?

Castration should be considered if you are keeping a male dog as a pet. Service dogs such as guide dogs for the blind and assistance dogs are routinely neutered. It has many advantages and few disadvantages.

What are the advantages of neutering (desexing) the male dog?

Is castration performed for any other reasons?

Castration is sometimes carried out to treat certain behavioural abnormalities since castrated dogs often become more gentle. However they lose neither their spirit nor their intelligence. Provided they are not allowed to become obese they are just as active as their entire counterparts.

What are the disadvantages?

Obesity is probably the most commonly quoted disadvantage. However judicious feeding of a balanced diet without excessive titbits should adequately control any problems of fatness just as it does in the entire animal.

Most of the perceived disadvantages are fallacies. The dog does not become characterless. Guarding ability, intelligence, playfulness and affection are not usually significantly altered in the castrated male.

When should the operation be carried out?

It has been shown that castration of the immature puppy does not have any disadvantages. The surgery is simpler if the dog is immature. Some sex hormone driven behaviour such as inter-dog aggression and the tendency to roam can become learned behaviours and persist after castration, therefore most veterinarians today suggest the operation be carried out before the dog is fully grown.

Is there any alternative to surgical castration?

“Chemical” castration involving the use of oral or injectable drugs is available but does not have the permanent effects that follow surgical castration. The use of such drugs may beaccompanied by side effects.

Are there any dangers associated with the operation?

Castration is a major although routine operation and requires general anaesthesia. Risk cannot be discounted entirely but with modern anaesthetics and surgical procedures this should not be a cause for concern when balanced against the advantages. In young animals the risk is significantly lower since operating time is so much less.

"Castration is a major although routine operation and requires general anaesthesia. Risk cannot be discounted entirely but with modern anaesthetics and surgical procedures this should not be a cause for concern when balanced against the advantages."

What happens when I leave my dog for this procedure?

He will have a pre-operative check and be premedicated which usually includes an analgesic agent so that he does not feel any discomfort on recovery.

He will then undergo general anaesthesia and surgery will be carried out via an incision just in front of his scrotum. Both testicles are removed and usually the scrotum is left in place but occasionally the scrotum may be removed as well as the testicles. Sutures are usually inserted in the skin incision and sometimes a special collar has to be worn for a few days to prevent excess licking.

Are there any post operative precautions I must take?

Post operative care is similar to that for any routine major surgery. Exercise has to be restricted for a few days and we will need to check the dog and remove sutures if necessary. Specific instructions will have been given when you collected your pet following the operation.

I am not keen on castration because I want to keep a puppy from my dog.

Most dogs used as studs have a successful exhibition record.  If you have successfully shown your dog and wish to use him at stud this is a reason for not castrating him but once his stud career is over and you are keeping him as a pet, castration should be seriously considered.

The wisdom of mating crossbreds or mongrels should be carefully assessed. The desire to retain offspring has to be weighed against the disadvantage of having to find homes for the other puppies in the litter bearing in mind that rescue organisations are over-run with unwanted dogs, mongrel, crossbred and pedigree.