Heat or Oestrus in the Bitch 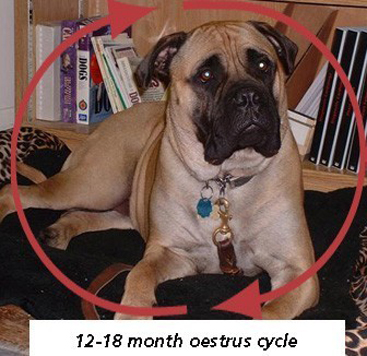 Normal reproductive function – the cycle in the bitch.

One of the disadvantages of owning a pet bitch is that she comes into oestrus or heat (season) every 4-14 months depending on the breed. Toy dogs and small breeds tend to mature earlier than large breed dogs. Most bitches will cycle every six months.

How will I know when my bitch is coming into season?

When the bitch first comes into season (pro-oestrus) her vulva will start to swell and usually the first signs are a blood stained discharge which sometimes can be very copious. She will appear to be cleaning herself more than usual.  At this time she is attractive to male dogs and walking her in public places will often result in a string of male followers. Although attractive to male dogs at this stage she is unlikely to allow mating but it can happen.

It is often noted that the bitch will pass small quantities of urine at frequent intervals. Since this contains certain marker scents (female pheromones) it is her method of advertising the fact that she will soon be ready for suitors!

This phase again lasts for about nine to ten days and ends when oestrus proper occurs and she is ready for mating.

The vulva remains swollen but the discharge reduces and usually becomes clear in colour. This phase again lasts for approximately ten days. It is the time when ovulation occurs and if she is mated she is likely to become pregnant.

This is followed by the third phase, known as metoestrus (approx. 4-6 days) during which swelling of the vulva gradually reduces, discharge ceases and she is no longer attractive to male dogs.

Her season will last altogether approximately three weeks and is repeated on average every six months although three to eighteen monthly cycles do occur and are not in some cases abnormal.

This is the time period when the bitch is under the influence of progesterone (secreted by the corpora lutea on the ovary) whether or not they are pregnant. This is the time that pregnancy, false pregnancy or pyometra can occur.

Anoestrus (duration about 4.5months, range 15days to 9 months). This is the period of least reproductive activity. There is no vaginal discharge and it is a time of endometrial repair. 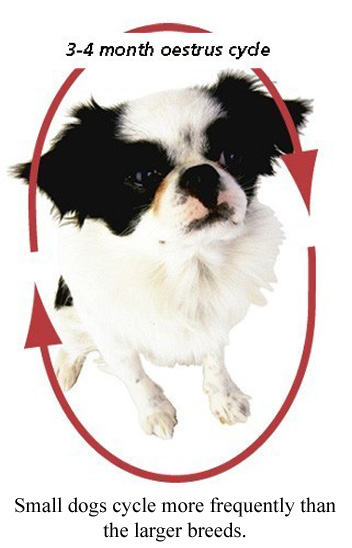 Can I exercise my bitch during this period?

Your bitch is not ill when she in season and consequently requires some exercise. This is always a dilemma for the owners of entire pet bitches who have to exercise their pets in public places.

Some bitches will ovulate early and thus allow mating at the beginning of their season (when they are in pro-oestrus) and in any case, during this phase the attention of other dogs is usually a nuisance.

If you do not wish to neuter your pet either surgically or by medical means, nor to suppress the signs of heat, it is important that you change your bitch’s exercise pattern to select times and places when male dogs are less likely to be around and be less of a nuisance.

You should exercise your bitch on a lead if there is any likelihood that other dogs may be in the vicinity. Extending leads serve a useful purpose at this time. Odour suppressants for application to the hair around the tail and hindquarters are of limited efficacy.

Tablets containing chlorophyll are also available which are claimed to reduce the bitch’s attractive scent when on heat but they too are of doubtful reliability.

Is my bitch likely to have any other problems associated with her cycle?

Some bitches, after they have been in season, will think they are having puppies although they have not been mated. This is known as a false or phantom pregnancy and the bitch will often go off her food and be disinclined to exercise although few lose weight. In most bitches the symptoms are mild and should be ignored. She should be encouraged to exercise as normal and any nesting behaviour and mothering of toys etc. discouraged.

"Some bitches, after they have been in season, will think they are having puppies although they have not been mated. This is known as a false or phantom pregnancy and the bitch will often go off her food and be disinclined to exercise although few lose weight."

In some cases a false pregnancy can be very severe.

Signs will include general malaise, enlargement of the breasts with production of milk, excessive nesting with a disinclination to leave the nest, guarding of toys or other objects. Sometimes temperament changes are noted.

Under these circumstances treatment may have to be instituted. Consult your veterinarian.

Some bitches will suffer severe enlargement of the uterus following a season. This may become infected and the bitch can show signs of increased thirst, enlarged abdomen and severe illness. This problem is sometimes unresponsive to medical treatment and ovariohysterectomy has to be carried out.

Entire bitches are considerably more prone to mammary neoplasia, (breast cancer) than those that have been neutered before their first season.

The first signs are usually hard enlarging lumps within the breast tissue.