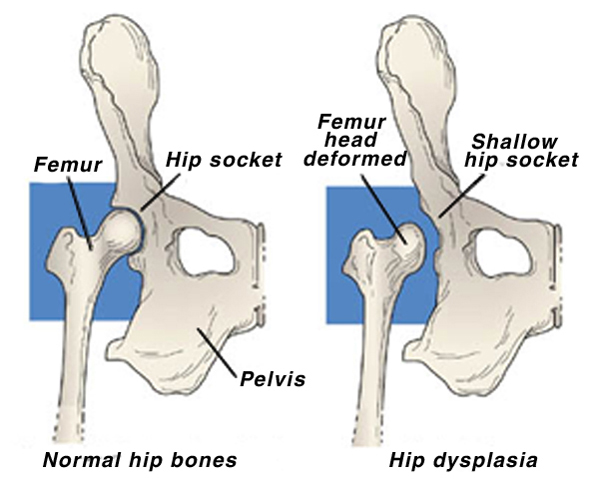 I have been told that my dog has hip dysplasia but there is no lameness. Can the diagnosis be correct?

Hip dysplasia is a deformity of the hip which occurs during the growing period. The hip joint is a ball and socket joint. Obviously during growth both the ball, (which is the head of the femur or thigh bone) and the acetabulum, (the socket in the pelvis), have to grow at equal rates.

In hip dysplasia this appears not to occur. The result is laxity of the joint which is soon followed by degenerative joint disease – arthritis, the reaction of the body in an attempt to stabilise the loose hip joint.

The degree of lameness that occurs is usually dependent on the extent of these arthritic changes and may not be directly correlated with the radiographic appearance of the hip joint. Therefore although your dog may appear to have loose joints on radiography, at present he may be completely sound. However the radiographic findings are an indication that sooner or later arthritic change will occur.

Hip dysplasia is said to be multifactorial and polygenic, in other words although hereditary, more than one gene is involved. There are also other factors, rate of growth, type of food, amount of exercise etc.

Since it is hereditary I presume it is more prevalent in some breeds of dogs than others?

Yes, although most breeds of dog can be affected it is predominantly seen in larger dogs, German Shepherd Dogs, St Bernards, Labradors, Labrador Retrievers, Old English Sheepdogs are among the most commonly affected breeds. However it should be remembered that cross breeds can also be affected.

What symptoms should I look for?

Weakness and pain in the hindlegs are the usual clinical signs. The dog appears wobbly behind and is reluctant to rise from a sitting position. This can be seen in puppies a few months old but is most common in dogs aged one to two years.

Dogs with mild hip dysplasia on radiography may develop minimal arthritis with no clinical signs until they are quite elderly. 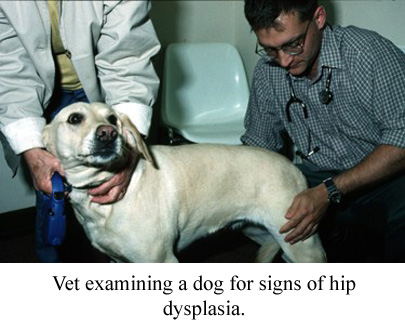 How is it diagnosed?

A hip radiograph will indicate that hip dysplasia is present but there may be no clinical signs. Usually the owner of a large breed dog will seek advice because the dog has difficulty rising. Clinical examination may reveal laxity of the hip joint but definitive diagnosis will be by radiography.

What is the treatment?

This depends entirely upon the clinical signs and the amount of discomfort shown by the dog. Initially anti inflammatory drugs will probably be prescribed. Today there are very effective non steroidal anti inflammatory drugs, (NSAIDs) that have minimal side effects. However just as with NSAIDs and humans, the choice of drug has to be made on an individual basis and sometimes various drugs may have to be tried before the most effective one is found for any particular individual.

Long term treatment with these drugs again depends upon the general health status of the patient and sometimes alternative treatments will be initially advised.

What are these and do they work?

The alternative to pain killers and controlled exercise is surgery. There are several procedures available including a total hip replacement, as is done in people, and a procedure called triple osteotomy whereby the shallow socket or acetabulum of the hip joint is repositioned in order to provide more stability to the hip joint.

Each case has to be assessed individually in respect to the line of treatment to be recommended.

I originally intended breeding from my dog.  Is this possible?

As already mentioned the condition is known to be inherited. In some breeds it is so prevalent that it would be hard to find an individual that did not show at least some radiographic signs of hip dysplasia.

In consequence in the Australia, the Australian Veterinary Association (AVA) and the Australian Small Animal Veterinary Association (ASAVA) run a scheme known as the Hip Dysplasia Scheme. The hips are radiographed in a standard position, usually with the dog either deeply sedated or lightly anaesthetised. The radiographs are then submitted to a panel of experts and a score is awarded. A new scheme called the PENN Hip Scheme© allows diagnosis of hip dysplasia at an earlier age and is increasingly being used, although stricter licensing of veterinarians able to take radiographs restricts access to the scheme. In order to reduce the incidence of the disease in the more HD prone breeds the advice is to select a mate with a score lower than the average of that breed. In this way you will be reducing the possibility of producing badly affected puppies rather than increasing it. Obviously in breeds in which the condition is not so common the responsible action is not to breed. 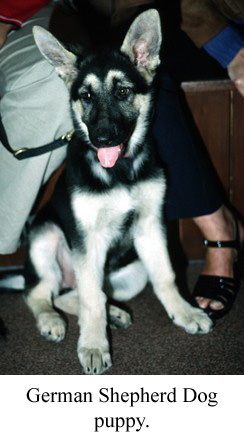 If I decide to breed is there anything else I can do to reduce the incidence of hip dysplasia?

There is a growing body of evidence to indicate that dogs that grow very rapidly are more likely to have more severe hip dysplasia. Therefore it is suggested that feeding a puppy food designed for large breed dogs or adult food to puppies of high risk breeds is worthwhile since it ensures that although nourished their growth rate is slower. They still reach their full genetic body size but just not as rapidly. Excessive exercise in the growing puppy may also play a role, particularly any climbing exercise. Therefore minimize running up and down stairs!

It is not necessary to treat your puppy as if handicapped but sessions of running or chasing thrown objects may be detrimental during growth.

Is there anything else I ought to know?

When purchasing a puppy it is always worthwhile ascertaining whether the parents have been radiographed under the AVA/ASAVA scheme if your choice is to purchase from one of the HD prone breeds. If the parents have been radiographed ask about their scores. It should be borne in mind however that heredity is not the only factor involved and there is still a chance that parents with relatively low scores will produce a puppy with severe hip dysplasia.

Once you have gathered together all the relevant information, do not hesitate to contact us and we will advise you in the light of the evidence available.