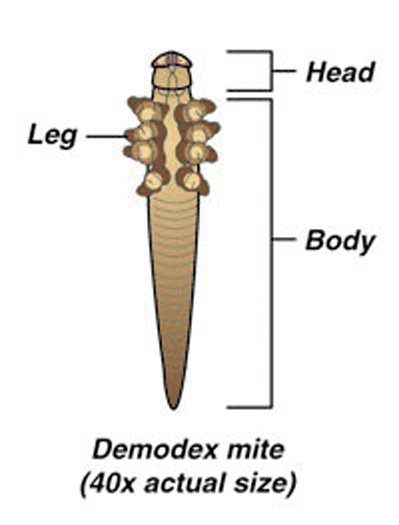 Mange is a parasitic skin disease caused by microscopic mites. Three different types of mites can commonly cause problems in dogs:-

The otodectic mite usually infests the ears and can result in Otodectic Mange. This causes irritation leading to bacterial infection which can result in otitis externa.

The demodectic mite usually resides in the hair follicles of the skin and can cause Demodectic mange. This is the most common form of mange in dogs.

The sarcoptic mite is responsible for canine scabies (Sarcoptic mange). It lives just under the skin.

This client education handout concentrates on demodectic mange, the most common form of generalized mange in dogs. Separate handouts deal with sarcoptic mange and otodectic mange.

What is the cause of demodectic mange?

Demodectic mange, "demodex", is the most common form of mange in dogs. It is caused by the microscopic demodectic mange mite, which lives in the hair follicles of affected dogs. The mites can be found on normal dogs (and people) since if the immune system is fully functional the mites cause no harm. Demodectic mange can occur in young dogs with very immature immune systems which allow the mites to reproduce rapidly. Therefore the disease often occurs in dogs of less than 12–18 months of age.

Frequently in these young dogs the mange will spontaneously improve as the dog grows and the immune system eventually matures.

Does this mean that demodectic mange is not contagious?

Yes.  Since the mite is frequently found on normal dogs, exposure of a normal dog to one with demodectic mange is not dangerous.

Can we develop demodectic mange?

No, it is extremely unlikely.  Unlike scabies (see below) it is not contagious to people.

Why does the immune system fail to develop in some puppies?

Development of the immune system, like other major body systems, is under genetic control. An affected dog will usually be found to come from a litter containing other affected puppies. It is important that the owners of litter mates are warned of the potential problems. Due to the genetic implications, affected dogs should not be bred.  It is also prudent to refrain from breeding further litters using the same parents.

Occasionally demodex can occur following treatment of the dog with immunosuppressant drugs (including corticosteroids) for unrelated conditions. 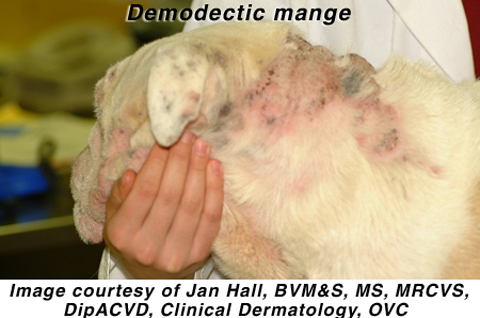 What effect does demodectic mange have on the dog?

Unlike sarcoptic mange, dogs with demodex do not itch, even though there is patchy hair loss. Areas of bare skin will be seen. The hair loss usually begins on the face, especially around the eyes. When there are only a few patches of hair loss, it is termed localised demodectic mange. If the disease spreads to many areas of the body, it is known as generalised demodectic mangeand is then often associated with chronic bacterial skin infection which will often cause intense irritation and redness of the skin, hence the name red mange. This chronic skin infection (pyoderma) also has to be treated if the condition is to be resolved.

How is it diagnosed?

Diagnosis is made upon examination of the dog with the presenting signs of hair loss (alopecia) and often secondary skin infection with redness, pustules etc (pyoderma). Laboratory examination of skin scrapings for demodectic mites and bacteria as well as blood and other tests are usually required.

How is the condition treated?

In the case of localised demodectic mange treatment involving anti parasitic and anti bacterial shampoos is usually sufficient. More generalised and also so-called adult onset demodecosis often involves prolonged treatment since concurrent skin infection has to be treated as well as the eradication of the causative mite.

Today a number of drugs are available which specifically kill mange mites and other ectoparasites such as fleas, lice and ticks. Some preparations are also effective against endoparasites, e.g. intestinal worms. Depending on the preparation it can be applied either as “spot-on” or given internally. The choice of preparation depends on the individual dog and the severity of the condition. We will advise on the type of treatment once laboratory tests and patient assessment have been completed.

For dogs with severe generalised demodectic mange the pyoderma (secondary skin infection) sometimes presents greater treatment challenges than the eradication of the demodectic mite. Treatment may involve prolonged courses of antibiotics and regular use of appropriate shampoos. 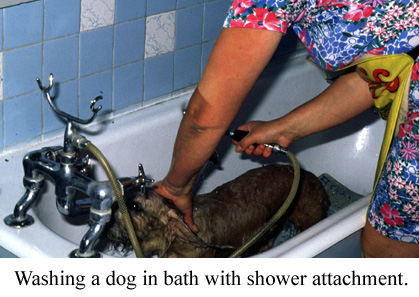 The use of modern drugs to eradicate demodectic mites combined with shampoos and antibiotics to treat secondary bacterial infections usually results in considerable improvement in the majority of affected dogs.

Following successful treatment, is it likely to recur?

Depending upon the overall state of the dog’s immune system and the prevalence of demodectic mites in the canine population at large, recurrence is a possibility. Should this happen it is important that treatment is recommenced without any delay and the directions for any medication prescribed are scrupulously followed. If you have any concerns please contact us.

Following treatment it may be necessary to have further laboratory examinations for the presence of mites or bacterial infection as the result of these may determine whether further treatment is necessary.