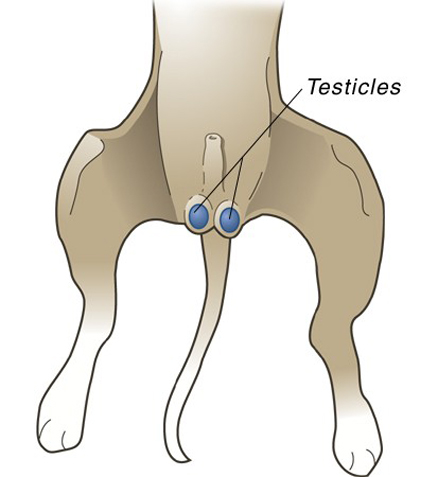 Most male animals (stallions, bulls, boars, rams and tom cats) that are kept for companionship, work, or food production are neutered (castrated) unless they are intended to be used as breeding stock. This is a common practice to prevent unacceptable sexual behaviour, reduce aggressiveness, and prevent accidental or indiscriminate breeding. However, many dog owners choose not to neuter their male dogs, despite the benefits.

How does neutering affect behaviour?

The behaviours that will be affected by castration are those that are under the influence of male hormones (see below). A dog’s temperament, training, personality and ability to do "work" are a result of genetic factors as well as its upbringing, and not reliant just on male hormones. Castration does not necessarily “calm” an excitable dog, and unless a castrated male dog is overfed or under-exercised, there is no reason for it to become fat and lazy.

Castration or neutering of male dogs is the surgical removal of the testicles (orchidectomy). The procedure involves a general anaesthetic. An incision is made just in front of the scrotal sac and both testicles removed, leaving the sac intact. Vasectomies are not usually performed since it is both sterilisation and removal of the male hormones that provide the behavioural and medical benefits of castration.

Which of my dog’s behaviour problems can be expected to improve following castration?

As mentioned, only those behaviours that are "driven" by male hormones, can be reduced or eliminated by castration. Although the hormones are gone from the system almost immediately following castration, male behaviours may diminish over a few days or gradually over a few months.

Urine Marking: Most adult male dogs lift their legs while urinating. Instead of emptying their bladders completely, most male dogs retain some urine to deposit on other vertical objects that they pass. Some males have such a strong desire to mark that they also mark indoors. Castration reduces marking in 80% of dogs with a marked improvement in 40%.

Aggression: Neutering will prevent reproduction and therefore the passing on of any genetic tendency towards aggression. Castration may also reduce or eliminate some forms of aggression but only those that are influenced by male hormones .

Are there any additional benefits to castration?

Medical benefits: Castration eliminates the possibility of testicular cancer and greatly reduces the chance of prostatic disease, two extremely common and serious problems of older male dogs. Many older dogs will develop prostate disease or testicular tumours if they survive to an old enough age. Castration can also reduce the risk of perianal tumours and perineal hernias.

Population control: Perhaps the most important issue is that millions of dogs are destroyed annually at animal shelters across Australian, Europe and North America. Neutering males is just as important as spaying females when it comes to population control.

Are there any risks?

Nowadays, with the broad selection of anaesthetic agents and state of the art monitoring, it is extremely rare for there to be anaesthetic or surgical complications during a canine castration.

Most young and healthy animals recover without incident. Often, the biggest concern is not the surgery and anaesthesia, but the recovery, as it is important to prevent the dog licking excessively at the incision line until it is fully healed. Careful monitoring and specific management for example, the use of a protective collar, known as an Elizabethan collar, may be required if excessive licking is observed following castration.

"Most young and healthy animals recover without incident. Often, the biggest concern is not the surgery and anaesthesia, but the recovery, as it is important to prevent the dog licking excessively at the incision line until it is fully healed."

When castration is being considered for an older dog, the benefits must be weighed against any risks associated with the anaesthetic and surgery. Since castration surgery is seldom associated with any complications, it is the anaesthetic that is the primary concern. If castration is being considered as a separate procedure for a medical reason (prostatic enlargement, testicular tumours, perianal tumours), then there is a significant benefit to the dog’s health, comfort and perhaps longevity, in having the castration performed. If the dog is exhibiting any undesirable behaviours that might be improved by castration (roaming, masturbation, mounting, inter-dog aggression, excessive sexual interest or marking), there may also be a significant benefit to be gained from castration. Although not infallible, a physical examination and any additional screening that your veterinarian may feel is appropriate such as blood and urine tests or ECG can help to evaluate the level of risk posed by the anaesthetic. These tests can also help your veterinarian determine which anaesthetic protocol would be safest for your pet. Since many older pets require anaesthesia for other procedures (e.g. removal of a growth, preventive dentistry), the benefits can often be further increased, and the number of anaesthetic procedures reduced by performing the castration along with the other health maintenance procedures.

What age is best for preventive castration?

A number of studies have shown that castration is as effective at preventing male associated behaviour problems as it is at reducing them. This means that whether the pet is castrated post-puberty (e.g. 1 year or older) or pre-puberty (e.g. 2 months of age) the behavioural effects are likely to be the same. There is, however, anecdotal evidence that dogs that are sexually experienced are more likely to retain their sexual habits after castration, compared to those dogs that have had little or no sexual experience prior to castration. Recently it has been advocated that castration be performed at as young an age as is practical, to ensure that it is done before the dog has a chance to breed. This is most important in animal shelters since it allows them to ensure that every dog adopted has already been castrated. To date, studies have shown that castration is safe, and has no long term detrimental effects on health or behaviour, regardless of the age that it is performed. In some cases a puppy may be neutered as young as 2 months of age. Reports from these studies suggest that the surgery is often shorter and that recovery is quicker with less post-operative discomfort. However, many people like to wait until the animal is older, waiting until all vaccinations are complete before admitting the dog into the hospital for surgery. However, if general anaesthesia is needed prior to the vaccinations being completed for any other reason (e.g. suturing a cut, removing grass seeds) this could be an excellent time to consider castration. In summary, there seems to be no behavioural or medical benefit to waiting until a dog is "mature" to perform a castration.

My dog has retained testicles - what does this mean?

During foetal development or shortly after birth, the testicles will descend into the scrotal sac. In some dogs the testicles may not descend fully. In many cases this is believed to be a genetic tendency. These dogs are known as either unilateral (one testicle) or bilateral (both testicles) cryptorchids. The testicle may be retained in the abdomen or anywhere between the abdominal cavity and the external sac. Retained testicles do not usually produce sperm, but they will produce hormones, which can lead to any of the behavioural changes or medical problems previously discussed. In fact, retained testicles may be more prone to developing cancer. At the very least, it would be extremely difficult to determine if a testicle which is located in the abdomen, begins to develop cancer, since it cannot be palpated until it is greatly enlarged. All dogs with retained testicles should be neutered for medical and behavioural reasons, and to ensure that this genetic abnormality is not perpetuated.