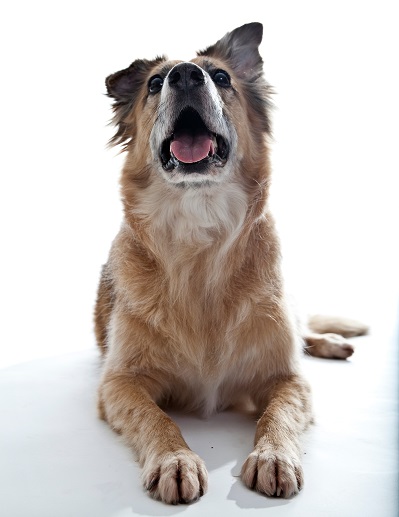 Is my dog’s behaviour normal?

Many excitable and boisterous behaviours are normal for puppies and will diminish with time and with appropriate early training. However, if the behaviour persists, is difficult for you to manage, does not respond well to basic training it is possible that it is driven by an emotional disturbance, rather than bad manners. A behavioural therapy approach may be necessary to resolve the issues.

It is therefore important to seek advice from your veterinary surgeon sooner rather than later so that appropriate techniques can be put in place to help you to resolve the problem behaviour.

This sheet provides basic information concerning dogs that do not respond to commands, jump on people, continually bark for attention, will not walk on a lead, steal things or generally wreak havoc on the household. The problem is compounded in large dogs because of their size.

Frequent and well-controlled exercise sessions and an early start to positive reward based training may prevent puppies from becoming too boisterous. If you wait until your puppy is 6 months old to start training, it may be too late and bad habits may have already taken hold. If this is the case you will then have to undo behaviours you do not like in order to get the ones you want and this can be a very time consuming and frustrating process, for both you and your dog.

Puppies have a short attention span and therefore training at an early age should take place in short but frequent sessions. You should motivate the puppy to perform behaviours using rewards, such as food treats (see our handout on basic training for further advice about this) and should avoid punishment based techniques. Reward based early training helps to channel puppies in the direction of appropriate and socially acceptable behaviour.

Do dogs get "Attention Deficit Disorder" or can they be "hyperactive"?

While hyperactivity disorder does exist in dogs, it is very rare. Dogs that are hyperactive, a condition also known as hyperkinesis or Attention Deficit Hyperactivity Disorder (ADHD), can only be diagnosed by veterinary examination and testing but even then tests may be inconclusive. Dogs with hyperactivity disorder are difficult to train, respond poorly to tranquillisation, may exhibit repetitive behaviours such as incessant barking or circling, may have gastrointestinal disorders, and can be extremely resistant to restraint. However, there are many much more common reasons for these behavioural symptoms. These include insufficient exercise, a mismatch between the diet and exercise regime of the dog, a general lack of stimulation or an emotional problem which results in the dog being over vigilant about the world around it. It is therefore important to look for other manifestations of abnormal emotions, if you think your dog is “hyperactive”.

I have tried training my dog without success. What went wrong?

If training has been unsuccessful it is always worth asking whether the dog understood what you intended to teach him. Errors of timing and reinforcement can easily occur and result in dogs learning inappropriate behaviours rather than the appropriate ones that we set out to teach them. The use of punitive techniques which are designed to decrease the expression of unwanted behaviour can induce negative emotions which can seriously complicate the training experience and can lead to a range of undesirable behavioural responses. If you have used a range of techniques including shouting at your dog, pulling on its collar, squirting him with a water pistol or rattling a can of pebbles in his face it is time to think again. So let us consider what works, what is ineffective, and why.

"Repetitive delivery of the same command in the absence of compliance can unintentionally teach your dog that the command is something that can be ignored."

How can I establish better communication with my dog?

In order to make progress in reducing boisterous behaviour it is essential to establish communication that both you and your dog can understand. The basis of this communication is to clearly indicate to your dog when he makes a good decision and to reliably and consistently reward him for appropriate behaviour. Combining this with passive ignoring of inappropriate behaviour will be the best of way of establishing a long lasting relationship with your dog that is based on mutual trust.

Formal training classes can be very beneficial in this process provided that they use positive, non-physical methods which are based on a real understanding of the proper use, timing and selection of rewards. On the other hand training which is based on punishment or on suppression of behaviour, through the use of gadgets such as water pistols and rattle cans, is counterproductive in the long term and runs a very real risk of inducing negative emotions such as fear and anxiety. Training which uses a combination of rewards and punishment can be extremely damaging since it induces a combination of positive and negative emotion in the same situation. If you are seeking help with training your dog it is important to visit the training club without your dog on the first occasion so you can watch the techniques that are being used and can assess whether the dogs in the class are learning through positive emotion. If they are then go ahead and book a place on the course but if you have any doubt it is better to keep looking!

What do I do if the unwanted boisterous behaviour persists?

If you are sure that you are basing your interaction with your dog on positive signals and you are avoiding punitive or suppressive techniques then you need to consider whether the persistent boisterous behaviour is a sign of an underlying emotional problem rather than a lack of education. If this is the case then you need to contact your veterinary surgeon and ask about referral to a veterinary behaviourist or a certified companion animal behaviourist. In depth investigation of emotional motivation will be necessary to make sure that appropriate techniques are used to resolve the problem behaviour.

I feel that I need more physical control over my dog – how can I achieve this?

There are a variety of collars, leads, harnesses and head collars on the market. Head collars have been designed to increase physical control over the dog's head and muzzle so that you can train your dog to perform desired responses but they also have the added advantage of using behavioural signaling to increase your dog’s feeling of security. This is in contrast with items such as choke chains which aim to induce compliance through the desire to avoid a negative outcome, such as pain around the neck and throat or audible challenge through the sharp chinking of the chain. There is a separate handout on how to train your dog to accept a headcollar.

Some brands of head collars are designed so that they can be left on the dog, just like neck collars (i.e. all the time when owners are home). A long indoor lead can be left attached for control from a distance. As soon as your dog begins to engage in unacceptable behaviour, you can gain physical control via the long line and head collar and gently direct your dog into performing a desirable alternative behaviour (“sit”, “down”, “quiet”). By the same token, if you give your dog a command and he does not obey, you can also guide your dog into compliance which can then be rewarded.

Now that I have better communication with my dog, what else do I need to do?

Often the key to turning a boisterous dog into a more relaxed one is consistent communication. It is therefore important to ensure that you passively interrupt inappropriate behaviour (using the long line approach) more consistently and also reward appropriate behaviour on a frequent and repeatable basis. Once your dog is reliably responding to commands and is engaging in far more appropriate behaviours than inappropriate ones you can remove the long line and rely on verbal communication. In the meantime it is important to try to ensure that your dog has limited opportunity to make behavioural mistakes. Some ways in which this can be achieved include:

1.  Limiting the access of your dog to areas where he is unsupervised.

2.  Closing doors to other rooms to avoid your dog running at speed through the house.

3.  Ensuring that your dog has plenty of opportunity to engage in calm but rewarding behaviour, such as chewing on hollow toys stuffed with food.

4.  Interacting with your dog in a positive manner and rewarding the behaviours that you do want.